The wiki about the Lone Ranger that anyone can edit With approximately 3,000 radio episodes, over 200 tv episodes, feature films, cartoons, serials, novels, comics and a wealth of other material, there is a lot of Lone Ranger lore waiting to be indexed.

Lone Ranger is an upcoming action film by Gore Verbinski, which will star Armie Hammer as the Lone Ranger and Johnny Depp as Tonto. It will be distributed by Walt Disney Pictures. Filming started early in March 2012. The release date is still unclear, but it will be sometime in 2013. Read More... 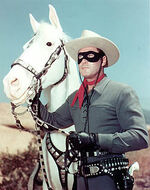 Retrieved from "https://loneranger.fandom.com/wiki/Lone_Ranger_Wiki?oldid=4931"
Community content is available under CC-BY-SA unless otherwise noted.