The Lone Ranger is an 2013 action film by director Gore Verbinski and producer Jerry Bruckheimer. The film is a thrilling adventure infused with action and humor, in which the famed masked hero is brought to life through new eyes. Native American spirit warrior Tonto (Johnny Depp) recounts the untold tales that transformed John Reid (Armie Hammer), a man of the law, into a legend of justice—taking the audience on a runaway train of epic surprises and humorous friction as the two unlikely heroes must learn to work together and fight against greed and corruption.

The film is distributed by Walt Disney Pictures and was released on July 3, 2013.

In 1933 at a country fair in San Francisco, a young boy named Will, who idolizes a legend known as the Lone Ranger, encounters a seemingly ordinary mannequin that is revealed to be a real native American named Tonto, an elderly Comanche spirit warrior, who proceeds to recount his experiences with lawyer John Reid, the original Lone Ranger. Shifting to March 18, 1869, Reid is returning home via the uncompleted Transcontinental Railroad, managed by railroad tycoon Latham Cole, en route to Colby, Texas to visit his older brother and Texas Ranger, Dan Reid. Unbeknownst to John, the train is also carrying Tonto and outlaw Butch Cavendish, who is being transported for his hanging after being apprehended by Dan. Cavendish's gang, however, hijacks the train, which derails soon after, resulting in Butch escaping and Tonto's arrest by John and Dan. The elder Reid recruits John as a Texas Ranger and the two are enlisted to track down the Cavendish gang alongside a group of six other Rangers. A few days into their expedition, the group is ambushed in a canyon by Cavendish's men who kill the Rangers, including Dan, who has his heart cut out and eaten by Butch himself. John is injured as well in the attack and dies, only to be found and revived by Silver, a white spirit horse thought to be sacred by the Comanche. When Reid awakens, he is informed by Tonto of his new status as a "spirit walker" (one that has been to the other side), and reveals that he cannot be killed in battle. Tonto also confirms that Collins (one of the seven original Rangers) betrayed Dan and is working alongside Cavendish, a "wendigo". As John is thought to be dead, he is made to wear a mask by Tonto to protect his identity as Butch would try and kill him permanently if he knew John had survived. He also gives John a silver bullet made from the fallen Rangers' badges and tells him to use it on Cavendish. They then travel to a brothel which had been visited by Collins recently.

There, they find Red Harrington, who gives them brief information about the fight between Dan and Collins over some silver rock. John touches the rock, which Tonto says to be cursed, and experiences a hallucination. Cavendish's men begin raiding settlements near the Comanche-American border while disguised as Comanche Indians. John and Tonto arrive after one such raid abducts Rebecca and Danny Reid, Dan's widow and son, the former of whom shares a mutual attraction with John. John and Tonto follow one of Cavendish's horses in an attempt to find where Rebecca and Danny have been taken to. Collins, who regrets his actions against Dan, attempts to assist Rebecca and Danny in escaping, but is shot dead by Cole, who rescues the mother and son. Assuming the raids are a sign that the Comanche have become increasingly hostile, Cole announces the continued construction of the railroad and dispatches Captain Jay Fuller, who leads the United States Cavalry in an extermination campaign against the Comanche. A Comanche tribe captures John and Tonto soon after they find railroad tracks in Comanche territory. The tribe leader tells John of Tonto's past: brothers Butch Cavendish and Latham Cole were rescued from near-death by a young Tonto. They found a rock of silver in the river, and traded Tonto a pocket watch to show them where the silver came from, which turns out to be an immense and undiscovered silver mine. The brothers then murdered the entire tribe to keep the mine a secret.

Unable to bear the burden of his role in the massacre, Tonto told himself that the silver had possessed the brothers, and therefore kept the pocket watch as a sign of his bad trade, along with his deceased pet crow on his head in hopes that it will return to life once he atones for his sins. The duo escape captivity as the Comanche attack the cavalry. Tonto leads John to the silver mine, where they kill Cavendish's men and capture Butch. Tonto demands that John use the silver bullet kill Cavendish to avenge his brother's death, but he refuses and revealed to Tonto what the Comanche chief told him, as well as discarding the mask. Tonto attempts to kill Cavendish, but John knocks him unconscious and decides to bring in Butch alive, both honoring his oath as a prosecutor and hoping to end the coming war.

Upon returning Cavendish to Latham Cole and Captain Jay Fuller's custody, Cole's role in the silver mining operation is revealed. Fuller is swayed to side with Cole out of fear that if his actions were to be publically revealed, he'd be charged as a war criminal. Meanwhile, Rebecca is kept on his personal train as a trophy wife and held hostage against John, who is being brought on the train back to the silver mine to be executed. However, he is rescued by Tonto and the two flee the mine as the Comanche warriors are massacred by the cavalry. Realizing the men's corruption, John decides to become an outlaw which Tonto gives the mask back to him. The duo rob a bank containing explosives and use them to destroy the bridge connecting the railroad's tracks to Comanche territory.

As the railroad is completed, Cole announces to the railroad owners that he will be buying out the company using the funds obtained by selling the mined silver, which has been collected and stored on his personal train. With help from Red, John and Tonto manage to stop the cavalry and steal Cole's personal train with the silver. A prolonged two-train fight occurs, during which Fuller is killed by falling off a train, Cavendish is killed by being hit by one of the opposing trains, and Rebecca is rescued by jumping onto John's horse. Tonto is held at gunpoint by Cole only to be disarmed by John after he fires the silver bullet. Tonto reveals himself to Cole, as the boy he traded the pocket watch with years earlier. The sequence culminates with Cole, his train, and the silver falling off the severed bridge and into the river below. The town and railroad enterprise recognize John (whose identity is still unknown to them) as a hero and offer him a law-enforcement position, since the town's rangers were all killed. John declines, and he and Tonto ride off. Back in 1933, Tonto instructs Will to never remove the mask.

In a post-credits scene, Tonto is seen walking away, in a suit (uncomfortably), from the camera in the desert.

In April 2012, it was announced that Jack White was hired to compose the score for the film. However, White later declined to work on the film's music, citing scheduling conflicts and was replaced with Hans Zimmer in December of that year. In March 2013, Michael Einziger tweeted that he was working with Zimmer on the score. 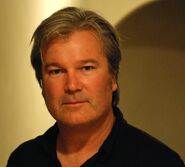 Retrieved from "https://loneranger.fandom.com/wiki/The_Lone_Ranger_(2013)?oldid=5053"
Community content is available under CC-BY-SA unless otherwise noted.